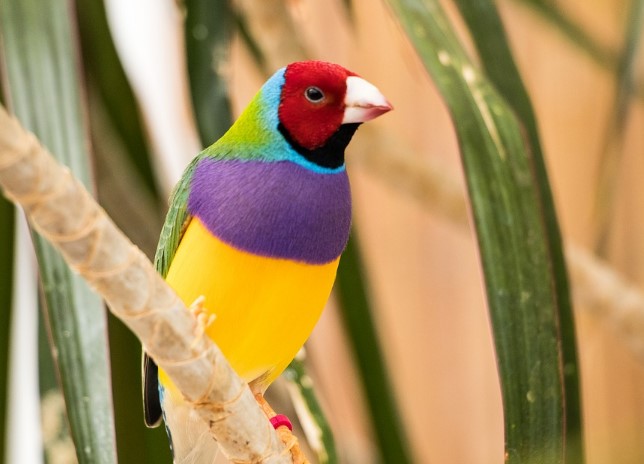 Types Of Finches – There are numerous types of finches and almost all of them are seed-eating songbirds.

Typically, they have stubby strong beaks and come in various colors. They are often found in well-wooded areas but they are known to survive quite well in mountain areas as well as deserts.

Finches are primarily granivorous, feeding on seeds of plants as a main source of food but many will add berries, arthropods and nectar to their diet.

The males of these types of finches have purple breasts, green bodies and yellow bellies. In the wild they generally have a black head but one out of four will have a read one.

Their habitat in Australia is tropical savanna woodlands. They prefer to stay in small areas unless food or water becomes an issue, then they will move.

This species prefers Central Australia, avoiding the tropical North area and the cool South area. They inhabit forests and grasslands, usually in close proximity to water.

The Zebra finch prefers to breed after a good rainfall so they are pretty much ready to breed year round. They are boisterous and loud singers and each male has a different song that they use as a mating song.

These are not naturally occurring birds but rather a fertile hybrid. No one really knows which wild finch these were derived from but they breed well and make good pets. They are cheerful little birds.

Society finches have been bred in Japan for around 250 years and breeders have managed to accomplish color variations such as fawn, chocolate and ginger with multiple patterns.

These are small types of finches found primarily in Southern Asia but have been introduced to Puerto Rico, California and Australia.

The adults have dark, stubby bills and brown bodies with white and black markings. They enjoy open woodlands and nest in grass structures created in trees or under the eaves to houses.

Native to Australia, these birds are usually found in open country or grasslands and are becoming very popular aviary birds. This breed is energetic, gentle, inquisitive and always on the move.

They love water and will bathe several times per day when given the chance. They are semi-nocturnal and when they pair up they form a deep bond and are rarely seen apart.

These types of finches have bright green bodies with scarlet colored heads, chest and tails.

This is a small species found in Europe and Asia but there has been a few sightings in the United States since 2005.

When males are matured, they are beautiful yellow birds with black and white patterned wings and a black cap on their heads.

The females are a light brown shade with a pale yellow bib and face with similar patterned wings.

They generally will flock with other finches and although they do enjoy seeds, these are a species that also eats insects, annual plants, weeds, grass, berries and maple sap.

These are striking African birds. The male’s head, tail and body are a beautiful sky blue color with beige underbellies. They have a wonderful song and both sexes will dance and sing. These types of finches are a treat to watch in courtship.

The male will carry grass blades in his mouth and bounce from one perch to another until the hen follows him and sings. In the wild, they feed on seeds, ant eggs, mealworms and fruit fly larva.

If you are considering taking a finch in as a pet, consider giving it an extra large cage with natural branches, plants and toys.

There is nothing sadder than keeping a bird in a confined area where they cannot fly. Be sure they have enough room to spread their wings and take a little flight.

2 thoughts on “7 Different Types Of Finches”