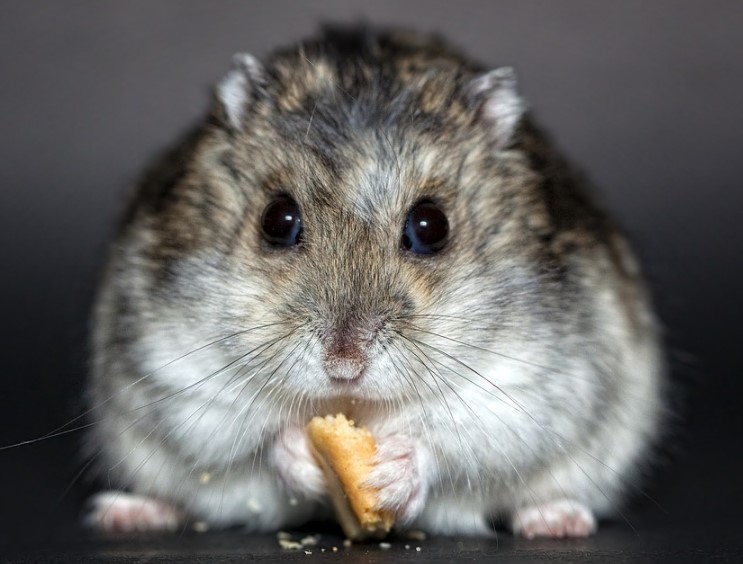 Hamsters are adorable creatures and make delightful pets. They are mammalian, but are also classified as rodent.

The word rodent comes from the French “rodere” which means to gnaw; hamsters are referred to as rodents because they constantly need to gnaw to keep their continuously growing incisors at a comfortable, workable size.

The cuddly critters suffer from poor eyesight but have excellent hearing and sense of smell. In the wild, hamsters eat mainly grains, fruits, grasses, seeds and insects.

Keeping them as pets, they can be fed grains, seeds, vegetables and fruits chopped up small, as well as pellets.

Hamsters are nocturnal creatures; they operate mostly at night. Most of variations in species live in mainly semi desert areas and are known for the elaborate burrows they build with compartments for storing food and sleeping.

They have expandable cheeks that allow them to store and carry food and materials for hording back to their expertly crafted burrows.

In fact, the word “hamster” is derived from the German word for “hording”. There are five main types of hamsters, let’s take a closer look at them.

At around 4-9 cm, the Roborovski hamsters are the smallest. They are also the most active and lively of the pet hamsters.

They make excellent pets for those who want to observe the hamsters at play; they are best kept in large cages or tanks with lots of toys and obstacles for them to display their agility.

They are not suitable pets for children who would prefer a pet they can hold and coddle.

Roborovski hamsters originated in Mongolia and Northern China; they tend to have a sandy goldish color on their backs with white tummies. In the wild they live in groups in linear borrows.

Most of their activities take place at nights and they rely mainly on their acute senses of hearing and smell to detect predators and one another. Their average lifespan is 3-4 years.

This hamster originates from Kazakhstan and south west Siberia; they are also referred to as Siberian hamsters. They are smaller in size than their relatives, the Dwarf Campbell’s Russian Hamsters, at approximately 8-10 cm.

The Winter White hamster has a spine which curves towards the rear, giving it an oval or bullet- like shape. However, like their relative they have the distinct darker dorsal stripe.

Though normally light to dark grey, if kept outside this fury hamster has the tendency to get lighter and often turns completely white in the winter. The hamster evolved in order to protect itself in the winter when it natural habitat is covered in snow.

Dwarf Winter White Russian Hamsters are sociable and can live in groups. They display similar social traits to the Dwarf Campbell’s Russian Hamster, but are nicer natured and less likely to nip handlers.

Winter whites have a general life span of 1 ½ to 2 years.

The hybrids will have characteristics of both these types of hamsters; with variations depending on the strength of the genes from each type.

Interbreeding is not encouraged as it is usually very difficult for the mother when giving birth to the hybrid hamster.

These more mouse like looking hamsters also originated from Asia, they are usually brown with a darker brown stripe along the spine.

They tend to be slender and measure around 10-12 cm with a longer tail than the other variations; giving it a particularly mousey appearance.

Chinese hamsters are extremely timid and very quick making them difficult to catch or hold; this is why they are not generally kept as pets.

Like the Roborovski hamsters it is best to keep and observe them in a large space with toys for increased interaction.

As with all the other hamsters, Chinese hamsters are nocturnal. In the wild they awake at dusk and spend most of their time collecting, transporting and hording food and materials.

It is said hamsters can travel up to 8 miles moving food and bedding from surrounding areas to their burrows. Chinese hamsters are particularly agile as they can climb and jump very high; using their longer tail for balance and grip.

These hamsters live in the semi deserts of Central Asia, Mongolia, the Altai Mountains and Northeastern China where they burrow in sand dunes.

Their scientific name is phodopus cambelli and they are usually smaller than the Syrian Hamster measuring 8-11 cm.

They are brownish in color with a distinct stripe down its spine. Campbell’s hamsters have rounded plump bodies with furry feet and are widely available in pet shops.

These hamsters make great pets because they are more sociable and can live in groups once they are introduced at an early age; mixed sex groups will likely mate.

Dwarf Campbell’s Russian Hamsters are also nocturnal but can be active for short bursts during the day.

A pair or group of Campbell’s hamsters living as pets will display a hierarchy; established when one hamster dominates the other eliciting a gesture of submission on hind legs in the corner of the cage.

Mature Campbell’s Russian hamsters will not respond favorably to the introduction of a new hamster and may get into fights. They are also known to nip clumsy handlers if they are irritated.

These hamsters are the ones most often kept as pets. They are sometimes referred to as golden hamsters because of their original fiery golden color, but the hamsters have since displayed variations in coloring and hair length.

Golden Hamsters generally measure around 12-16 cm and live for about 2-4 years; they are sometimes also referred to as fancy or standard hamsters. This hamster has hairless feet; four toes on its front and five on the hind.

As adorable as this hamster is, if kept as a pet, it should live alone in its own cage as it prefers to live in solitude in the wild; these hamsters may get into fights and cause injury if kept with others.

The female Syrian hamster tends to be bigger and more active than the male, but it is the male that is usually more adorned with very long hair and a “skirt”.

In the wild, the hamsters spend most of the night collecting and depositing food and bedding to its burrow, they are highly territorial and build their homes considerable distances away from other hamsters.

1 thought on “6 Types of Most Popular Hamster Breeds”